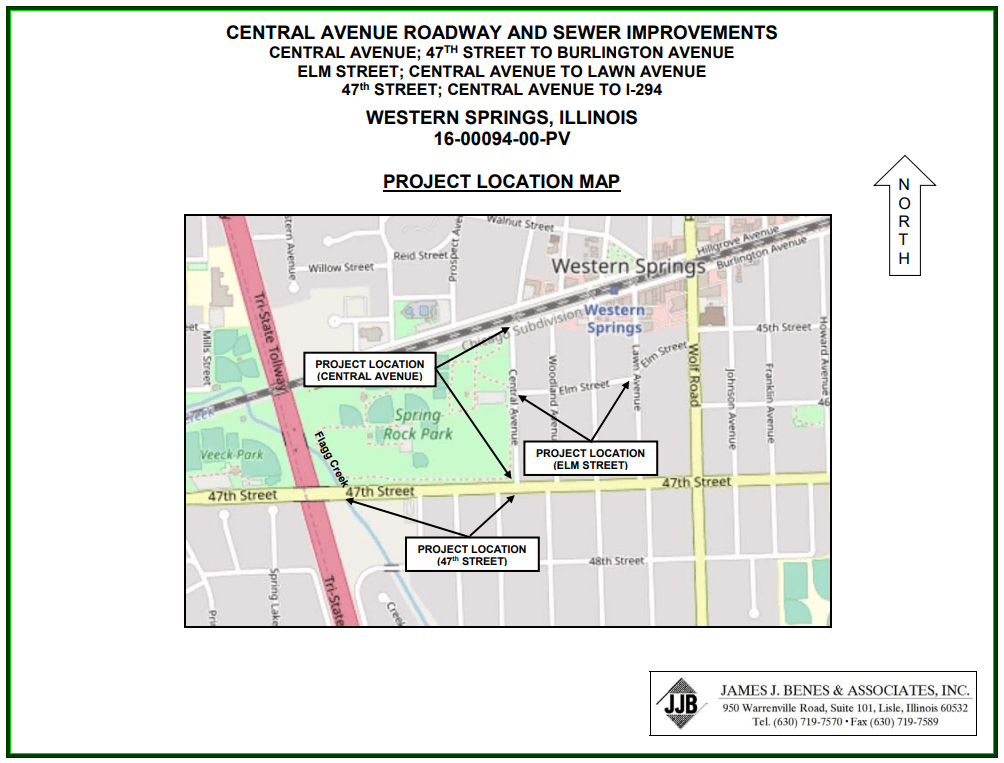 The reconstruction of Central Avenue has been identified utilizing the Village’s prioritization criteria for capital improvement planning.

The Village’s Long-Term Control Plan (LTCP) is a document required by the IEPA as part of our National Pollution Discharge Elimination System (NPDES) permit. An NPDES permit is required for all communities which have combined sewer systems which carry both storm and sanitary water. During periods of heavy rainfall, the wastewater volume in a combine sewer system can exceed the capacity of the system, resulting in overflows and discharges of excess sewer water to nearby streams, rivers and other waterways. The Village has four combined sewer overflows (CSOs), one of which (CSO #3) is directly impacted by the proposed project.

Street flooding is commonly observed near 4635 Central Avenue and near 4708 Fair Elms because of exceeded capacity from storm events in this combined sewer system.

CSO #3 is located near 48th Street within the Village and discharges into Flagg Creek. The Village’s LTCP has identified the construction of a new storm sewer along 47th Street to separate the Old Town South Subdivision (Basin 4) as a priority project.

Surface Transportation Grant (~$2,554,313)
Central Avenue is identified as a “minor collector” street under the FHWA’s Functional Classification System for roadways. It is one of the few streets owned and maintained by the Village eligible for federal grant funds. The Village received a grant in 2015 for the reconstruction of Central Avenue from Burlington to 47th Street to improve its capability as a minor collector street serving 47th Street (Minor Arterial) and the rest of the central business district. Central Avenue also serves as a connection to the Village’s other minor collector streets, including Burlington Avenue, Hillgrove Avenue and Hampton Avenue.

MWRD Stormwater Phase II Project (~$752,936.86)
In late 2018 the Village applied for an MWRD grant for the separation of the combined sewer system on Central Avenue and portions of Elm Street. This project is identified as a priority project under the Village’s LTCP to separate basin 4. Eligible projects for the MWRD program are green infrastructure, localized detention, up-sizing critical storm sewers and culverts, pump stations and establishing drainage ways.

The project will establish a new storm sewer outfall to Flagg Creek, which will serve as the “backbone” for future separation projects in the Old Town South subdivision.