Following the water crisis in Flint, Michigan, many water consumers are asking the question: is my drinking water safe?

Lead is NOT present in the Village's source water (groundwater), nor is Lead found in the Village's treated drinking water; however, if buildings have service lines containing Lead, Lead can enter the drinking water through the corrosion of plumbing materials. Other sources of lead exposure in the home include lead solder used to join copper piping, household plumbing and fixtures, soil, paint chips, and dust. The amount of lead in drinking water is generally fairly low and also highly regulated.

Regulatory measures taken during the last three decades have worked to greatly reduce human exposure to lead in drinking water:

The Safe Drinking Water Act (SDWA) is the federal law that ensures safe public drinking water supplies throughout the nation. Prior to the SDWA, there were few enforceable requirements for drinking water; however, improvements in the technology of sampling and testing allowed for contaminants to be identified at smaller concentrations and subsequently regulated. The SDWA was passed in 1974 and clearly identified the roles of the EPA, at the federal and state levels, as well as the responsibilities of water operators at the local level.

In 1986, the SDWA saw its first set of amendments which included the regulation of many known contaminants, as well as, the banned use of lead pipes and lead solders in drinking water distribution systems and new residential and commercial construction.

Legacy lead pipe sections, including lead service lines, still represent the greatest potential source of lead in drinking water systems. The estimate on the number of full or partial lead service lines that remain in the United States varies largely. Some surveys have returned estimates ranging from 6 million to as many as 10 million lead service lines.

The United States Environmental Protection Agency first issued this rule in 1991 pursuant to the Safe Drinking Water Act. This federal regulation limits the allowable concentration of both lead and copper at the consumer's tap, as well as, the permissible amount of pipe corrosion due to water corrosivity. The main purpose of this rule was to eliminate water as a source of lead contamination. A 2005 study of the Lead and Copper Rule concluded that it has lived up to its promise and has reduced lead exposure, especially in that of children, by 96 percent nationwide.

The Reduction of Lead in Drinking Water Act, the Lead Free Law, went into effect in January 2014, and was designed to reduce the permissible lead content of brass plumbing products used in drinking water fixtures, including the content of residential fixtures. Internal corrosion of brass meters and plumbing fixtures contributes to the concentrations, and therefore exposure, of lead in drinking water.

Prior to the Lead Free Law, manufactures of brass fittings were allowed to use no more than 8 percent lead content by weight; however, in January 2014, that was drastically reduced to 0.25 percent by weight with respect to wetted surfaces of pipes, plumbing fittings, and plumbing fixtures. Fire hydrants and components used exclusively for nonpotable consumption are exempt from the new definition of "lead-free." Legacy piping components installed prior to regulation of leaded materials may also continue to release lead as long as they remain in service.

The EPA suggests that certain pipes, faucets, and service lines can contribute to lead in drinking water 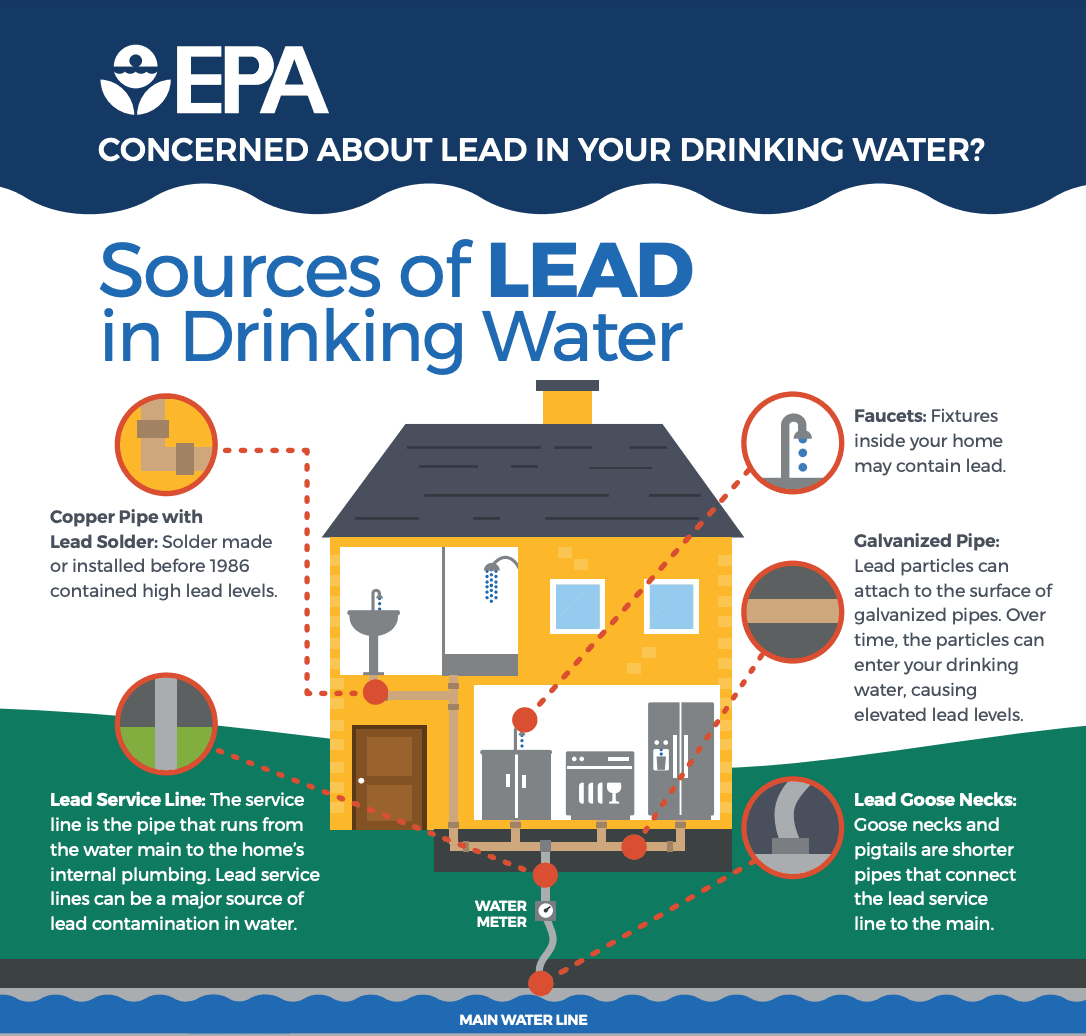